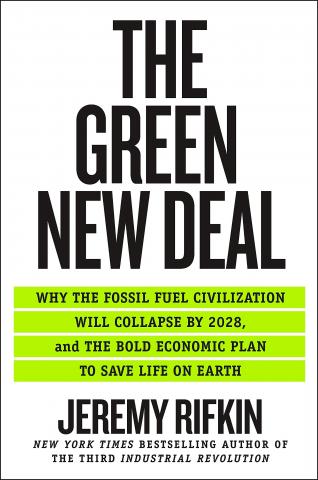 Why the Fossil Fuel Civilization will Collapse by 2028,and the Bold Economic Plan to Save Life on Earth

A new vision for America’s future is quickly gaining momentum. The Green New Deal has caught fire in activist circles and become a central focus in the national conversation, setting the agenda for a new political movement that will likely transform the entire US and world economy. Although the details remain to be hashed out, it has inspired the millennial generation, now the largest voting bloc in the country, to lead America on the issue of climate change. In The Green New Deal, New York Times best-selling author and re-nowned economic and social theorist Jeremy Rifkin delivers the political narrative, technical framework, and economic plan for the debate now taking center stage across America. The concurrence of a stranded fossil fuel assets bubble and a green political vision opens up the pos-sibility of a massive global paradigm shift into a post-carbon ecological era, hopefully in time to prevent a temperature rise that will tip us over the edge into runaway climate change.