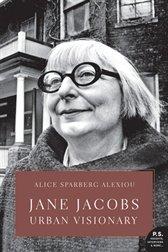 A Maclean's national bestseller, now with P.S. the story of a revolutionary thinker whose ideas changed our cities.

When urban planning activist Jane Jacobs died in April 2006, Canada mourned the passing of one of the most influential thinkers of the 20th century. But the ideas and insights of her richly packed life of social action including her groundbreaking Death and Life of Great American Cities, written over 40 years ago still resonate. In Jane Jacobs: Urban Visionary, journalist Alice Sparberg Alexiou explores the ideas of this incisive, passionately engaged mind and celebrates Jacobs' contributions to the debates that have directly informed how many of us live today.

From the controversy that erupted when Jacobs dared to take on conventional urban planning wisdom in the 1960s to Jacobs immigration to Canada in 1968 and her immeasurable influence on Torontos cityscape, as well as her lesser known and equally provocativeworks on economics, Alexiou offers a thoughtful tribute to the award-winning and inspirational thinker, writer and activist.